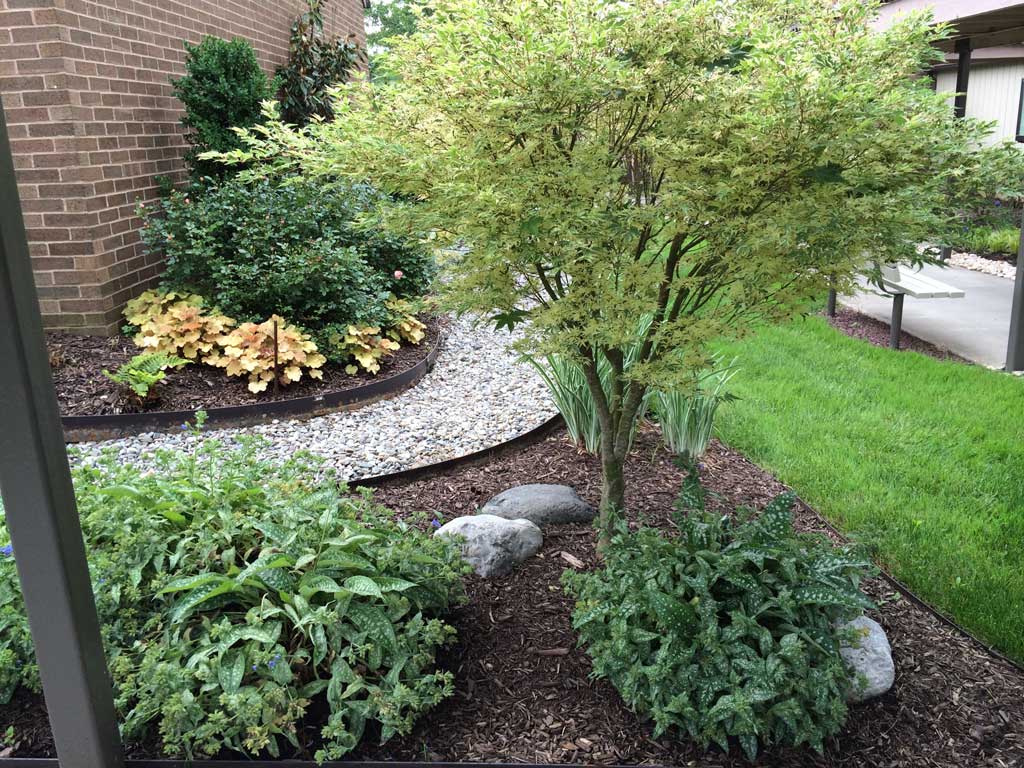 What do you do when you move from a large beautifully landscaped property that is overflowing with texture and color, to a retirement community that is populated with yews, uneven ground, old black drainpipes, and overrun with deer?

That was the tall order that, I as the landscape designer, had to deal with. My client was an enthusiastic and knowledgeable gardener so she wouldn’t be satisfied with ordinary plantings. She wanted unique, colorful, and scaled-down – but striking. Most importantly, she wanted a handicap accessible pathway to be able to walk around the entire property which was sloping and uneven so that she could enjoy the plantings.

The unit was large but the limitation was we could only extend out from the walls six to eight feet around the perimeter. And the existing plantings were the usual suspects – yews, hollies, and overgrown trees. Any plantings that were installed had to be small in stature in ultimate height and breadth, but also imposing enough to make a statement upon first installation.

Because of the sloping site, grading with a wall was required to level the grade around most of the unit. The finished height of the wall ultimately was only about 15 inches but it was mandatory so that my client could safely navigate the sloping terrain. With those features in mind, my stone mason came in and installed an 85-foot long dry stack wall of colonial bluestone around the entire unit. The wall was needed so that we could install a 30-inch wide winding pathway to circumnavigate the entire landscape.

Drains were replaced, extended, and buried, ending with a pop-up green cap. The cap pops up when a downpour dumps rain and forces the top up to release the excess water. When installed, the only visible sign of the drain is the small green cap.

A 30-inch wide pathway was dug out and edged with a very sturdy metal edging that had to be staked and hammered in. A flimsy plastic edging would be inadequate for the heavy-duty river jack that was used for the pathway. Landscape cloth was placed on top of the soil so that the river jack would stay put and not be mixed into the underlying soil. Soil staples fastened the cloth securely to the ground and the river jack was dumped in and raked about 2 inches thick.

Outside of the sunroom area, the client wanted a small sitting area so that she could enjoy a nice summer day outside in the garden. A small patio 8 feet x 8 feet was installed with irregular bluestone pieces in stone dust edged with cobblestones to give it definition.

The plantings were installed in a very small 3 to 4-foot space bordered by the pathway and each plant was carefully selected and placed. In a small garden, the quality and types of plants are very visible and selection is paramount. On a large south-facing wall where yews had been, we planted an espaliered magnolia flanked with upright boxwoods, with an underplanting of apricot drift roses and Artemisia stelleriana ‘Silver Brocade’. The Artemisia is a great little silver-leafed creeping ground cover for hot and dry situations.

After the plantings were installed, the next step was drip irrigation. Brown rubber tubes were laid among all the plantings so the water is applied precisely to each plant. It is all connected to a control box that was located in a nearby utility shed for easy access.

Mulch – Icing on the Cake

After the irrigation installation, tan-bark mulch was laid down to a depth of 2 inches to cover up the brown irrigation hoses to give it that finishing touch. The entire job work time was only about 2 to 3 weeks in length. The planning process was much longer – a couple of months to get everything drawn out and prepared. 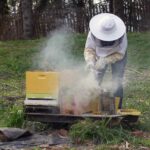 Beekeeping for Newbees and Wannabees

Transforming a Hillside into Pond and Waterfall 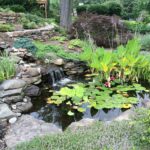